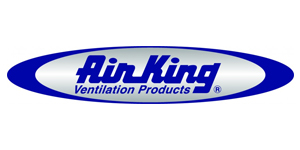 West Chester, PA – April, 2017 – has been named a 2017 ENERGY STAR Partner of the Year – Product Brand Owner Award winner for its outstanding contribution to reducing greenhouse gas emissions by manufacturing energy-efficient products and educating consumers about energy efficiency. Air King’s accomplishments will be recognized by the U.S. Environmental Protection Agency and the U.S. Department of Energy in Washington, D.C. on April 26, 2017.

Air King America, LLC an ENERGY STAR partner, will be honored as a partner of the year for its dedication to producing energy efficient ventilation products including exhaust fans and kitchen range hoods.

Air King president, Jeff Kenkelen says, “We are very proud to again be recognized by ENERGY STAR as a Partner of the Year. Providing high quality, energy efficient products are at the core of Air King’s philosophy. Having this dedication acknowledged by ENERGY STAR is truly an honor.”

For a complete list of 2017 winners and more information about ENERGY STAR’s awards program, visit www.energystar.gov/awardwinners.

About Air King
Air King has been developing ventilation products for over 40 years and is an industry leader of energy efficient ventilation solutions. Air King is receiving ENERGY STAR® Partner of the Year recognition for its successful leveraging of the ENERGY STAR platform. Key 2016 accomplishments include:

ENERGY STAR® is the simple choice for energy efficiency. For 25 years, EPA’s ENERGY STAR program has been America’s resource for saving energy and protecting the environment. Join the millions already making a difference at energystar.gov.